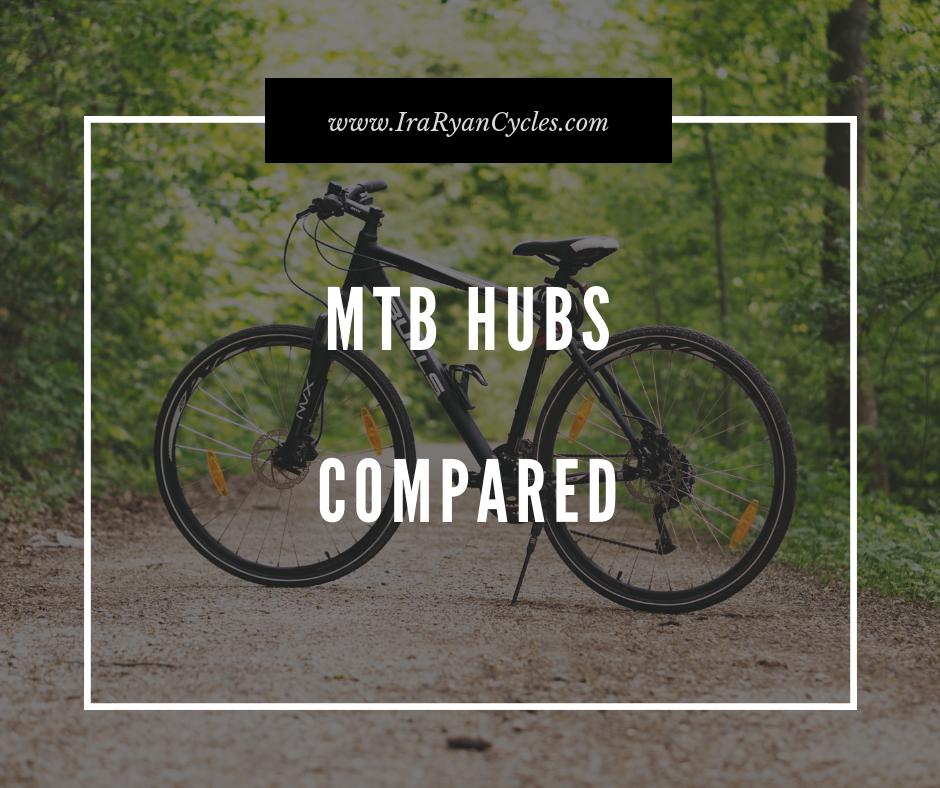 Whether you’re an old hand on the trails or you’re new to the wonderful world of mountain biking, it’s likely you’ve heard that the hub is one of the essential components of your bike.

But what separates the best mountain bike hubs from the merely good?

There’s quite a lot of engineering and craftsmanship that goes into the manufacture of the best mountain bike hubs, for one thing.

While you don’t need an engineering degree just to know what hubs do and how they work, it doesn’t hurt to have a little background knowledge.

That’s why I’ve written this article – because I’ve been mountain biking seriously for fifteen years, and I’ve made some mistakes along the way. I want to share the lessons I’ve learned with you.

When you buy something from this website, I may receive an affiliate commission. These are my own opinions and are not representative of the companies that create the products. My reviews are based on my personal experience and research. I never recommend poor quality products or create false reviews to make sales. It is my intention to explain products so you can make an informed decisions on which ones suit your needs best. 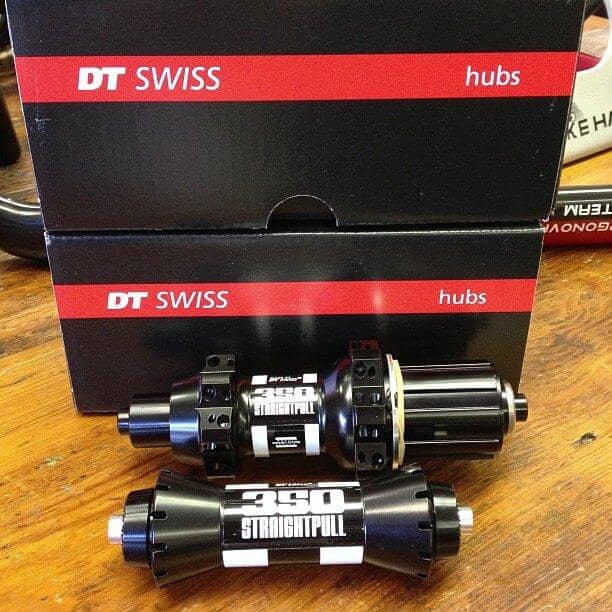 DT Swiss is a legend in the mountain bike community.

While their MTB hubs certainly don’t come cheap, you’re also guaranteed a high standard of excellence whenever you purchase one of their pieces.

On top of that, it’s ultra-lightweight and has a more extensive diameter to increase its strength and durability.

However, the real standout feature here is the sheer number of engagement points. Because the hub engages every 20 degrees, you’re in for one smooth ride.

This MTB hub is also accessible to service and upgrade, and there’s an upgrade readily available that will take the engagement all the way down to 10 degrees.

While the upgrade is an added expense, getting a hub with the durability and reliability of a DT Swiss and 36 engagement points is pretty stellar.

The one downside for me when it comes to the DT350 is its high price. It’s worth it for very avid mountain bikers or anyone with a right amount of extra cash, but may not be the best choice for anyone on a tight budget.

As one of the best mountain bike hubs for cross country riding, though, it may be well worth the extra cost for anyone interested in that. 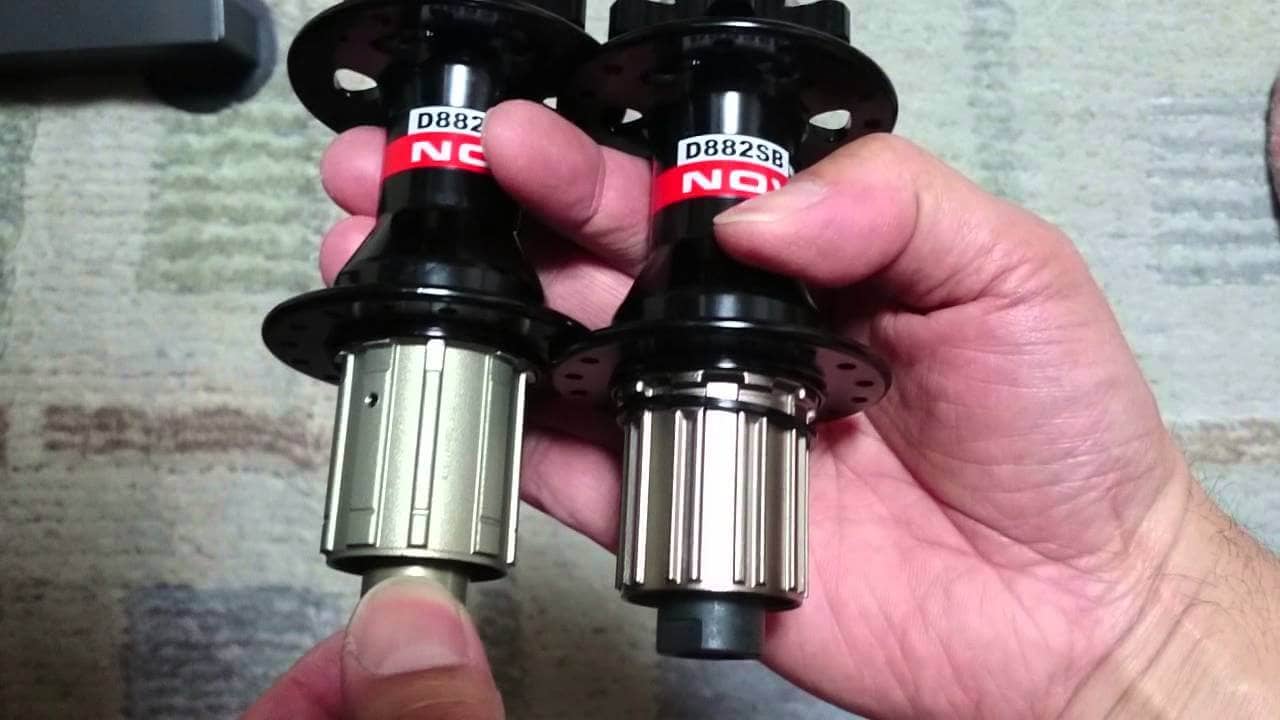 This mountain bike hub kit from respected manufacturer Novatec offers everything you need to upgrade your bike’s stock hubs.

In addition to looking fresh in bright red, these hubs also provide some of the smoothest quick releases I’ve seen in a long time.

However, what shines in my mind is their 28 engagement points, which make for a smooth ride with the engagement kicking in every 12 degrees or so of the wheels’ revolution.

While there are indeed hubs out there with more engagement points, I don’t know of any others at this price point.

The price point is a significant feature for me too. Positioned a little higher than the low end of the industry, but well below some of the older manufacturers out there, there may be some of the best budget mountain bike hubs on the market.

Amazingly, they also weigh in at only 401 grams, which is just about the lightest you’ll see a decent hub constructed.

While I love the effect this has on the overall weight of my bike; I do worry a bit more about durability in the long term. They seem built to last, but might not be the best for severe trail riding. 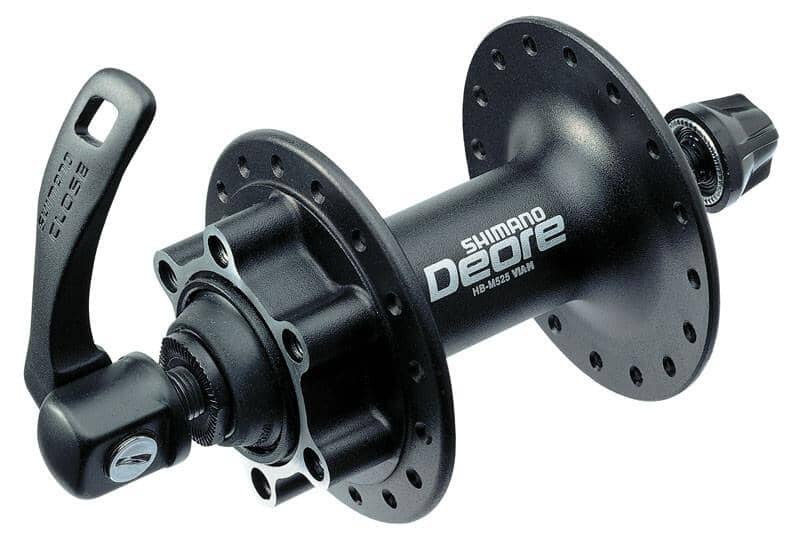 Shimano is one of the biggest names in the mountain biking community, and for a good reason. They consistently create reliable parts at a wide variety of price points.

While there are certainly different levels of Shimano product, they all have a tremendous minimum standard of performance.

While the HB-M525 isn’t the absolute cheapest hub you’ll find on the market, it is an excellent budget choice for mountain biking enthusiasts.

It’s also one of the more accessible hubs to work within my experience, so it might be an excellent choice for new mountain bikers looking to upgrade their hubs for the first time as well as well.

With 18 points of engagement, this offering from Shimano makes for a smooth ride.

Unfortunately, it’s not as easily serviceable or upgradable as some other hubs, but at this price point, it’s a hard value to beat.

I have heard from some users that the ball bearings are often not thoroughly oiled when shipped (or that the oil settles in shipment, instead), which means this part does need a little breaking in before it rides at its smoothest potential.

However, that’s true of virtually every mountain bike hub out there to a point.

While this could potentially be a drawback, as could the lack of upgrade potential, it’s much better than most stock hubs and comes at a high price with plenty of engagement to boot.

On top of that, it’s simple enough for even less experienced cyclists to use with confidence.

The first thing you’ll probably notice about this set from Talisman is its look.

The DC4 collection is available in three colour options, all of them two-tone–and all of them look wild.

The standard black tone is accented with blue, copper, or red, depending on your preference. As good as they look while your bike sits at home, they look even better in motion.

The beauty of these is a lot more than skin deep though. Weighing in 428 grams and boasting severe durability at the same time, after all, is no mean feat.

On top of that, their excellent engagement and lightweight build lead to them being one of the best sounding mountain bike hub sets that’s hit the market in a while.

All those engagement points–72 of them, in fact–do a lot more besides making the hub sound cool. They also make this one of the smoothest riding mountain bike hubs around, even on pretty hard terrain.

Of course, this is made more accessible by the two oversized 6902 ball bearings in the front hub (and four in the rear mountain bike hub!).

On top of that, they’re available at a steal of a price.

While they’re not the cheapest mountain bike hubs on the market, they come in at a much lower price point than many comparable models–including many with fewer points of engagement.

They’re more serviceable than a lot of the hubs out there, too, with tool-free disassembly on the rear hub doing service or even upgrading a breeze. Of course, that’ll also cut down on the maintenance time requisite with just about every mountain bike hub.

With their ability to be splined for either Shimano 10 or SRAM XD, they’re also one of the most versatile sets of mountain bike hubs on the market today. On top of that, they’re ultra durable–meaning they pack in even more value for every dollar spent.

I find these hubs to be a significant middle ground between the high price hubs often used by professional cyclists and the middle-quality parts that make up much of the consumer market.

To put it another way, they offer many of the advantages of professional hubs but at a more consumer-friendly price.

Need to upgrade the stock axles on your bike or replace the axles along with your brand new MTB hubs?

Or maybe you want to reduce weight.

Either way, one of the best ways to get the most out of your mountain bike hubs–and the rest of your bike, for that matter–is to break things down further.

Going beyond just customising the hub to customise the axle can make your bike more efficient and durable.

In my opinion, reducing the overall weight of the Mountain Bike while retaining all the durability you can is key to any mountain bike experience–whether you’re racing, downhill biking, or just cruising your local trail system on Sundays.

This axle set from Miles can bring out the best in your new hubs, and all at a high price too. Their lightweight steel construction offers both low weight and greatly enhanced durability for your entire wheel.

The hollow shaft offers reduced weight, too, so sliding these onto both your front fork and the rear of your bike can add up and reduce your weight overall a good deal.

Combine these with other great features like reduced weight mountain bike hubs and a carbon fibre frame, and you just might have the lightest bike of your whole cycling group.

When I was first breaking into the mountain bike world years ago, and I started customising bikes for the first time, figuring out Mountain Bike hubs was one of the toughest parts of the business.

Because MTB hubs for XC or downhill(or anything else) are incredibly complicated pieces of machinery, and because they’re not exactly the most significant and most notable thing on a bike (especially when you’re less experienced), there isn’t a whole lot of knowledge about them in the population at large.

It’s like a lot of other things in the mountain bike community, as we gain specialised knowledge through experience.

However, there aren’t many other parts on an MTB that most non-cyclists won’t even recognise.

Fortunately, hubs are a lot simpler than they might seem at first glance.

Getting mountain bike hubs explained to you is half the battle, and I’m about to solve that bit for you now.

The axle slots through the hub and attaches to the fork, and the wheel’s spokes all connect to the hub. Apparently, the hub is a pretty important part of your bike.

It goes beyond that, though–the hubs also feature ball bearings to allow and encourage wheel movement. The rear hub is even more complicated, as it interacts with your bike’s transmission.

That’s why I always recommend upgrading the rear hub if you only have the funds to improve one hub at a time.

Additionally, because the ball bearings and other machinery inside the hub are essentially making the bike move, they have a whole lot of impact on the smoothness of your ride.

You’ll often see how many “points of engagement” or “clicks” a given hub has–which is how many times the internal machinery engages in a single revolution of the wheel.

There’s a whole lot of complicated science behind it, but to understand the basics, all you need to know is this: the more engagement points, the smoother your ride will be.

This will affect other elements of mountain bike riding, too, like your acceleration capability.

The best mountain bike hubs boast serious durability, especially regarding their moving parts.They’re also engineered to work with less weight, which makes your bike overall much leaner and faster.

On top of that, a reliable hub will make your ride smoother than ever.

Now that you know a bit more about mountain bike hubs–or you’ve gotten a quick refresher if you’re already in the MTB community–let’s move on to the real reason you’re here: honest reviews of some of the hottest hubs on the market.

Finding the best MTB hubs for your own needs can feel like an uphill battle much of the time. I hope this article has helped you learn a bit more about what makes some mountain bike hubs better than others, and that one of the products I’ve reviewed here will be right for you.

Have you had great experiences with any of the MTB hubs for cross country, downhill, and other applications that I’ve mentioned in this article? Let us know in the comments! We’re always happy to hear success stories from the mountain bike community.

1 thought on “What are the Best Mountain Bike Hubs?”