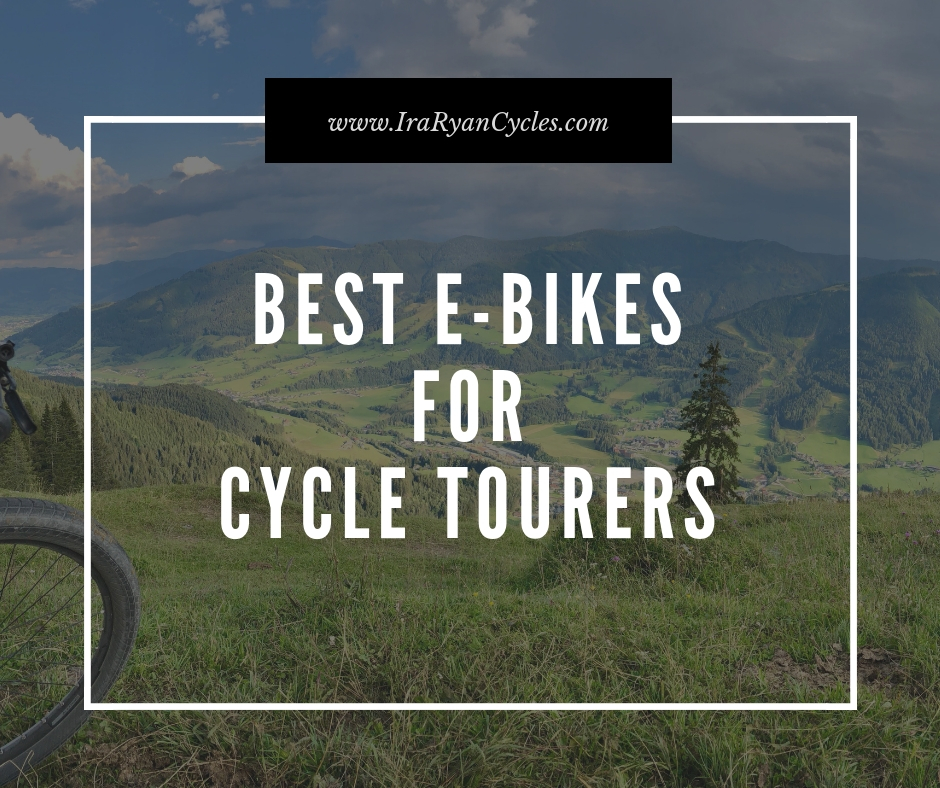 When you ride a bike, your senses are thrilled by the wind in your hair, the sound of trees swaying in the breeze, the wonderful scents, and the endless vistas.

It doesn’t matter whether you’re using a trike, a regular bike, a tandem, a recumbent, or one of the best electric bikes for cycle touring; you’re in for a thrilling experience.

In China, there are already hundreds of millions of e-bikes on the road, and the sales are now surging in Europe – especially in nations that have long cycling traditions.

There are even markets where electric bikes have been the only area of cycling growth. When you enter any typical Eurobike trade show, you’ll find a great number of manufacturers all looking to make a crack into the electric bike niche.

Today, everyone seems to be very excited about the technology and the overall potential of the bike genre. And if you are yet to be convinced about the hype, you can easily find someone offering a full-day testing for electric bikes where you can test-ride them on an airfield.

On the country’s major cycle roots, Switzerland has over 600 batter swap points. This allows riders to swap out their batteries at designated bars, hotels, restaurants, and bike shops.

The Swiss government actually sees e-bikes tourism as a sustainable and healthy way of interacting with their beautiful environment. In short, e-bikes are the real deal there.

However, there seems to be some divide between people who pedal their own steam and those who prefer employing some electric assistance. Some perceive it as cheating, while others view it as a perfect opportunity.

Nonetheless, the majority understand that there’s no correct way to travel. After all, you’re going to have the same experience with or without a motor on your bike.

Here, at Ira Ryan Cycles, are a few different kinds of e-bikes, along with the technology they offer, and how they can make your overall life better.

Benefits of an Electric Bike over a Traditional Bicycle

Disadvantages of an Electric Bike

A good quality bike with a proper electric system should operate fine for bike touring.

Most of these are well-designed and sealed to withstand shock.

Quality motors and batteries can withstand a temperature range of -15 to +45 degrees Celsius, as well as snow, mud, sandstorms, hail, and bumpy roads.

Gijs Stevers, who cycled an electric bike from Norway to South Africa, asserts that the only problem he ever had to deal with was the computer display fogging up after encountering heavy rain.

What’s the Range of Electric Bikes?

The battery range will depend on a number of factors: how hard you pedal, the size of the battery, how hilly the route is, the assistance level you choose, your weight, how windy the weather is, tire inflation, bike weight, road surface conditions, etc.

In other words, the range can be anything from 10km to 300km.

According to Gijs, if you cycle at 18km/h on a flat surface in non-windy conditions, a 250w electric engine can boost you up to 25km/h. At this level, a 400Wh battery will assist you up to 100km. But if you opt for less assistance, you will get an even longer range.

Most people who use e-bikes are quite selective with their electricity range; saving power only for the windy and hilly bits of their path. E-bike riders typically learn to preserve the battery by coasting downhill, and then working the gears as needed to ensure they maintain an optimal gear.

Charging on the Road

It’s surprisingly easy to find access power points while on an e-bike tour.

Many people choose to recharge their batteries at the guesthouses and hotels they stay in along the way, though you can also recharge in petrol stations, cafes, offices, churches, and supermarkets if you’re polite enough.

In case you’re planning to cycle over 100km in a day, you may want to consider charging yours over lunch. Getting a half-charge over lunch at a restaurant should get you another 50km down the road.

The full charge time for e-bikes is 3 to 4 hours, based on the size of the battery.

Is a Bicycle Tour Really Worth the Trouble?

Depending on what you’re looking to achieve, a bike trip can really be worth it.

The bike itself won’t be a limitation, considering that the motors are quick to charge and reliable. The power points aren’t really hard to find, especially in populated parts of the world.

Gijs suggests that the extra weight of the electric bike is nullified if the motor helps you get out in the hills.

To get better range, many riders like to bring along two batteries. This way, in case they need more pedal assist power, they can get about 100km of range from the combined 800Wh worth of batteries.

Pedelec (Pedal Assist): This type of e-bike assists you only while you’re pedaling.

They feature a torque sensor in the motor that determines when it should be operating. Sometimes, it’s combined with a cadence sensor for greater accuracy.

Higher quality pedelecs usually little or no delay between when you start to pedal and when the motor steps in to assist, which makes the power delivery almost seamless.

Throttle: These feature a button or a grip twist on the handlebar, which lets you choose how much power you need, and when you need it. They work like the throttle on a motorbike, and can be implemented into pedelec bikes too.

Also referred to as crank-based, center-drive, or central motors, mid drive motors are located at the crankset of the bike.

The key advantage of a mid-drive is that it uses the bike gears that results in optimal torque for a variety of situations such as on the flat or climbing a hill.

This helps make the motor more efficient and effective (especially on hills), resulting in a better range.

You can ideally use the standard wheels on the mid-drive bikes, offering you better options for dynamo and internally geared hubs. The standard wheels also help make it easier and quicker to remover the wheels to fix things like punctures.

The mid-drive system is also lighter than hub motors.

The weight is located lower and central on the frame of the bike, meaning it only affects the handling minimally.

There’s also no need for strengthened dropouts or torque arms on the e-bikes, though they often require a specially designed frame to accommodate these motors.

Due to these and more benefits, most e-bike manufacturers are increasingly moving towards mid-drive designs.

These are the most common kinds of motors used in e-bikes. Hub motors are incredibly powerful and efficient, and can be easily fitted in almost any standard bike.

Geared motors are generally more efficient while climbing a hill, have minimal resistance at the wheels, and are lighter and smaller. The key tradeoff here is that there’s higher motor noise and lower reliability due to the more moving parts.

Direct drive motors are a lot more common since they are the quietest option available.

They are also super reliable, since they have no moving parts. Their main drawbacks include having less torque available for climbing hills and the increased hub weight.

It’s worth mentioning that some direct-drive motors allow you to harness some power through regenerative braking on hill descents.

These are usually elegant and simple, and ideal for retrofits on regular touring bikes.

The front hubs are also preferred in cases where the rider prefer using an internally geared hub like Shimano Alfine, Rohloff 14s, or the Nuvinci.

The major drawback with front-hub motors is that the weight at the front affects the overall handling of the bike.

A good example of a hub brand is Ezee.

These are quite a popular choice on modern e-bikes, since the rear wheel weight usually have a lesser effect on the bike’s overall handling.

As such, you can fit a really heavy and powerful rear hub motor (up to 1500w) on an e-bike to boost its overall performance.

To use a rear hub motor, a Pinion gearbox or derailleur gearing have to be employed. Also note that a very strong rear-frame will be needed for the more powerful motors.

A motor connected to the bike is not the only way to power yourself along.

Electric trailers are a great way to push you along.

For instance, you can get a Ridekick trailer, or even build one on your own with an incorporated electric front hub.

One benefit of an electric trailer is that you won’t have to lung around the heavy battery and motor; you can just unhitch it in a matter of seconds.

Electric motors have legal restrictions in various countries around the world.

In Australia and Europe for instance, e-bikes have a 250w limit, while the U.S. allows 750w motors, and Canada 500w motors. E-bikes are also speed limited to anywhere between 25km/h to 32km/h depending on the country.

Is a motor more powerful than 250w necessary?

Well, simply put, a 500w motor can offer twice the assistance, but the batteries will only last half as long. So, if range is important to the bike rider, a 250w bike with big batteries is more than adequate.

Batteries are available in a number of different configurations.

However, what matters when comparing how far a battery pack can take you is the watt hours. These are easy to calculate if you know the battery configuration or specification:

Batteries often come in 24v, 36v, and 48v configurations, and the amp hours are generally between 6Ah to 17Ah, which results in batteries in the range between 200Wh to 700Wh. In general, the bigger the battery the higher the range.

Batteries are often mounted on or below the rear rack, on the down tube, or the seat tube. The best place to put a heavy battery is the most centralized and lowest position, often along the seat tube.

This helps to reduce the effect of the weight of the batteries on the overall handling of the bike.